I hope you had a nice Christmas! Any leftover cookies, cakes, pies and candies?! No worries because these exercises will help you in shedding that holiday fat and get back into a nice fitness routine again. Always consult your doctor or health adviser before beginning any exercise program, make sure you are well hydrated and warmed up first. Today we are going to start work on the upper body and core. Now lets get started! 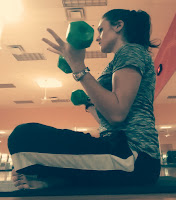 Come to a comfortable seated position and with your dumbbells (5-15 lbs) in hand. Keep your elbows in towards your sides. Extend both arms bringing the weight towards the floor, with the inhale lift the weight by bending the elbows and bring your attention to the biceps muscles while curling weights to the shoulders. Exhale repeat 10 reps or until fatigue. 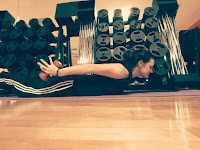 Lie on your stomach with your arms to your sides holding dumbbells (3-5 lbs). Lift your head and feet off the ground while extending your arms behind you. Remember to BREATHE. Bend your elbows until your weights hit the floor and extend back again. Repeat 10x or until fatigue. 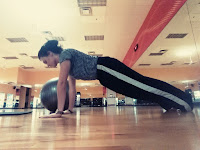 Come to all fours then move into plank (or modify by staying on your knees) engage the core and align the shoulders with your hands; weight shifts into the heels. Hold for 30-60 seconds then repeat 3x. 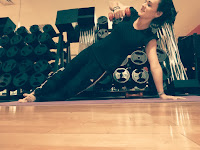 For a video demo of this exercise click here. 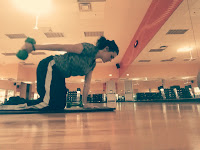 Come to all fours bend your elbow keeping your arm glued to your side. Extend weight back behind you with the exhale then with the inhale bring weight back to meet your shoulder. Keep your core engaged and focus on the tricep muscle. Repeat 10x then switch sides. 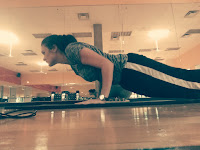 Begin in plank, keep elbows next to sides and gaze forward. Inhale, and with the exhale lower and hover for a few seconds. Push your body back up to plank position and repeat 10x.

Cool Down
Now cool down by doing some stretches which work the areas we just focused on. Add in 5-10 minutes of cardio and keep well hydrated. For a more detailed program which caters to your needs and experience please visit my website or email: cherihausmann@outlook.com. HAPPY NEW YEAR! 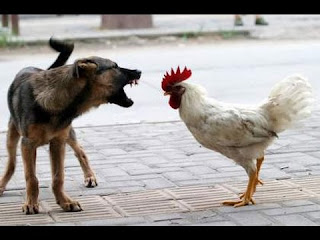 I think most can agree that 2016 was a difficult and slow-moving year. With a country divided by politics and an aura of uncertainty, 2016 leaves much to be desired. Luckily we always have the hope of a new year and this time around the ROOSTER gets the opportunity to strut its stuff.

I've always found the Chinese Zodiac to be fascinating. What better than to have a sneak peak into the underlining qualities of each year before it even begins (even if it doesn't exactly turn out that way). Nevertheless whether you believe or not, each animal within the year carries with it both good and bad tendencies we can all learn from.

Before we go any further here's a look into some background ROOSTER characteristics for our hopeful year of 2017:

Now that's all wonderful and nice but being the realistic person I try to be, I've also sought out the more challenging characteristics of this mysterious animal. If you're like me then the thought of a ROOSTER makes you think of waking up to very early mornings in a not so peaceful yet necessary way. Thus the ROOSTERS 2017 year of hope may bring with it abrupt beginnings mixed with lots of stubbornness. Have you ever lived by a rooster or had one yourself? Then you must know that they can be very strong-willed and demanding animals! After all that was their job before technology took over everything..

Does this mean 2017 is already set in stone? Maybe! It depends on what you decide to do with it. Of course if an alien invasion or meteor strike interrupts it all, there's nothing we can do about that.. but surely we can at least try to work on what we have in the meantime.

A stubbornly strong will can actually be good when used the right way. If you are working on setting goals for the new year expect an increase in motivation to adhere to these goals most especially in the beginning. It's the later stages of this goal which can bring with it some problems. First off roosters are very good at sticking with something in the beginning, but they lack interest further on down the road.  Does this sound like you? I know in certain areas in life I can most definitely relate to this! The roosters problem is not motivation but a lack in interest. No shock as to why the ROOSTER is a morning animal! If its job were to be a night watchmen it would have lost interest in tending to its post far earlier in the day. 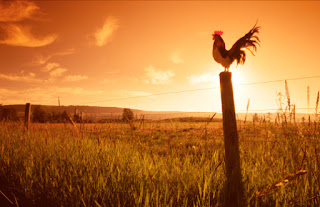 This is why it is so important to plan ahead and start soon for any undertaking you've been setting your sights on for 2017. If you wait too late in the year there's a good chance you won't be interested long enough to give time to it.

Focus is needed. The ROOSTER is good at focusing for a time but can get easily distracted once it feels its job is done. Luckily the ROOSTER knows there's always more work to do. It may get distracted but it will always come back to its post the next morning.

The ROOSTER is COURAGEOUS. After the dud year for most that was 2016.. this is music to our ears. Even though this animal can be impatient, stubborn and perhaps at times a bit pretentious.. the ROOSTER will stand up with much COURAGE and confidence. Now who doesn't like to have the mighty will-power to fight for something?! I certainly do!

In my own personal take I think 2017 will be a year of dusting off the old to make it good as new again. It's a time of refreshing. Like an early morning sunrise when you've had enough sleep to actually enjoy it. That doesn't sound too bad at all. I'm looking forward to this new year and if you are still reading this I can sense you must have the spirit of hope in you too. 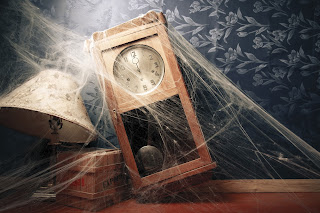 Why not dust off the old and make it good as new! It won't be a time to throw stuff away but to face those things which are long overdue and keep hold of what has been forgotten. It's a time to have the COURAGE to care for the things which are most valuable in our lives. And hey, even if 2017 will come to be another dud year and everything I just said is a load of nonsense, at least we learned a bit about this awesome animal!

Get ready because the ROOSTER will be sounding its alarm whether you like it or not. Bring it on 2017 I'm ready! Only question is ARE YOU?!

Posted by Cheri Hausmann MA E-RYT PFT at 4:00 AM No comments: